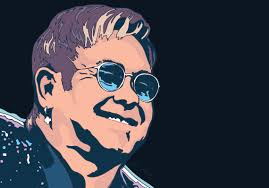 Pete Townshend of the Who asked John to play a character called the “Local Lad” in the film of the rock opera Tommy, and to perform the song “Pinball Wizard”. Drawing on power chords, John’s version was recorded and used for the movie release in 1975 and the single came out in 1976 (1975 in the US). The song charted at number 7 in the UK.

The 1975 autobiographical album Captain Fantastic and the Brown Dirt Cowboy debuted at number one in the US, the first album ever to do so, and stayed at the top for seven weeks

In June 1975, John introduced the line-up before a crowd of 75,000 in London’s Wembley Stadium

On 9 August 1975, John was named the outstanding rock personality of the year at the first annual Rock Music Awards at ceremonies held in Santa Monica, California.

By 1975, the pressures of stardom had begun to take a serious toll on him. During “Elton Week” in Los Angeles that year, he suffered a drug overdose. He also battled the eating disorder bulimia. In a CNN interview with Larry King in 2002, King asked if John knew of Diana, Princess of Wales’ eating disorder. John replied, “Yes, I did. We were both bulimic.

In October 1975, John became the 1,662nd person to receive a star on the Hollywood Walk of Fame.

In 1979, John and Taupin reunited, though they did not collaborate on a full album until 1983’s Too Low For Zero. 21 at 33, released the following year, was a significant career boost, aided by his biggest hit in four years, “Little Jeannie” (number 3 US), with the lyrics written by Gary Osborne

Sir Elton John’s coat of arms. Granted to him in 1987, the crest includes piano keys and records. The Spanish motto, “el tono es bueno”, combines a pun on the singer’s name with the translation “the tone is good”. The black, red and gold colours are also those of Watford FC. The steel helmet above the shield faced forwards and with its visor open indicates that John is a knight.

In 1994, Elton John was inducted into the Rock and Roll Hall of Fame by Guns N’ Roses frontman Axl Rose

Along with Tim Rice, Elton John wrote the songs for the 1994 Disney animated film The Lion King

On 10 November 1999, the RIAA certified The Lion King “Diamond” for selling 15 million copies

In 2000, he and Tim Rice teamed again to create songs for DreamWorks’ animated film The Road to El Dorado. he released his 27th album, Songs from the West Coast, in October 2001.

In 2000, he was named the MusiCares Person of the Year for his artistic achievement in the music industry and dedication to philanthropy

His only theatrical project with Bernie Taupin is Lestat: The Musical, based on the Anne Rice vampire novels. However it received harsh reviews from critics and closed in May 2006 after 39 performances

Elton John was named a Disney Legend for his contributions to Disney’s films and theatrical works on 9 October 2006, by the Walt Disney Company. In 2006, he told Rolling Stone that he plans for his next record to be in the R&B and hip hop genre. “I want to work with Pharrell Williams, Timbaland, Snoop [Lion], Kanye [West], Eminem and just see what happens.

In October 2015, it was announced Elton John would release his 32nd studio album, Wonderful Crazy Night, on 5 February 2016. As with his last album, it was produced by T-Bone Burnett. The album’s first single, “Looking Up”, was released that same month. This album marked John’s first full album recorded with his touring band since 2006′s The Captain & the Kid

The 70-year-old music icon is set to step back from live performances in 2021, but not before he embarks on a lengthy world tour which will see him perform over 300 shows across the globe throughout the next three years.