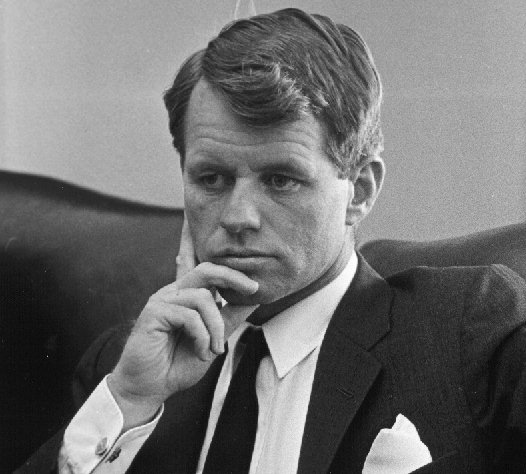 Kennedy went on to work as an aide to Adlai Stevenson during the 1956 presidential election which helped him learn how national campaigns worked, in preparation for a future run by his brother, Jack. Unimpressed with Stevenson, he reportedly voted for incumbent Dwight D. Eisenhower. Kennedy was also a delegate at the 1956 Democratic National Convention, having replaced Tip O’Neil at the request of his brother John, joining in what was ultimately an unsuccessful effort to help JFK get the vice presidential nomination

He gained national attention as the chief counsel of the Senate Labor Rackets Committee from 1957 to 1959, where he publicly challenged Teamsters President Jimmy Hoffa over the corrupt practices of its union and authored The Enemy Within, a book about corruption in organized labor

…He left the committee in late 1959 in order to run his brother’s presidential campaign.

He served as the United States junior senator from New York from January 1965 until his assassination in June 1968.