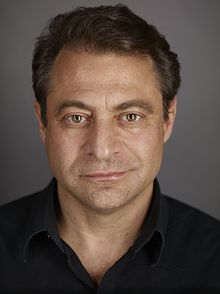 In 1986, Diamandis put his medical degree on hold and returned to MIT to pursue a master’s degree in aeronautics and astronautics, conducting research at NASA Johnson Space Center, the MIT Man Vehicle Laboratory and MIT’s Whitehead Biomedical Institute…

BlastOff! Corporation
Between 2000 and 2001, Diamandis was the CEO of BlastOff! Corporation, which proposed to fly a private rover mission to land on the Moon as a mix of entertainment, Internet and space. The company lost funding and ceased business in 2001.

….In 1994, Diamandis founded the X PRIZE Foundation after the failure of International MicroSpace, Inc[1] and reading Charles Lindbergh’s The Spirit of St. Louis. He serves as the chairman and CEO of the foundation. The X PRIZE was created to fund and operate a $10 million incentive competition intended to inspire a new generation of private passenger-carrying spaceships. The prize was announced on May 18, 1996 in St. Louis, MO without any purse money or any teams.[18] The prize was ultimately funded through an insurance policy underwritten by the Anousheh and Hamid Ansari Family and renamed the Ansari X PRIZE in their honor.

The $10 million competition attracted 26 teams from seven countries as teams and was won on October 4, 2004 by Mojave Aerospace Ventures, a team run by famed aviation designer Burt Rutan and funded by Microsoft co-founder Paul Allen. The winning vehicle, SpaceShipOne, was piloted to space twice within two weeks to win the competition. The first flight was made on September 29, 2004, piloted by Mike Melvill and the winning second flight was made on October 4, 2004 by pilot Brian Binnie. SpaceShipOne was the world’s first non-government piloted spacecraft[19] and is now hanging in the National Air and Space Museum adjacent to the Spirit of St. Louis aircraft….