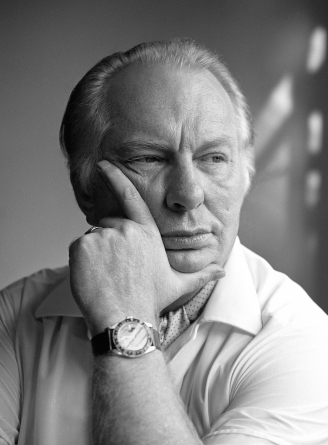 In 1927 Hubbard’s father was sent to the U.S. Naval Station on Guam in the Mariana Islands of the South Pacific. Although Hubbard’s mother also went to Guam, Hubbard himself did not accompany them but was placed in his grandparents’ care in Helena, Montana to complete his schooling.

In the summer of 1927, Hubbard took up teaching to the native Chamorros in Guam for several weeks. He returned to Asia in 1928 to stay longer. For fourteen months, he traveled around China and served as a helmsman and supercargo aboard a twin-masted coastal schooner, returning to finish high school at Swavely Prep School in Virginia and Woodward school for
Boys in Washington, D.C.

Hubbard’s unofficial biographers present a very different account of his travels in Asia.

Hubbard’s diaries recorded two trips to the east coast of China. The first was made in the company of his mother while traveling from the United States to Guam in 1927. It consisted of a brief stop-over in a couple of Chinese ports before traveling on to Guam, where he stayed for six weeks before returning home. He recorded his impressions of the places he visited and disdained the poverty of the inhabitants of Japan and China, whom he described as “gooks” and “lazy ignorant”. His second visit was a family holiday which took Hubbard and his parents to
China via the Philippines in 1928.

After his return to the United States in September 1927, Hubbard enrolled at Helena High School, where he contributed to the school paper, but earned only poor grades. He abandoned school the following May and went back west to stay with his aunt and uncle in Seattle. He joined his parents in Guam in June 1928. His mother took over his education in the hope of putting him forward for the entrance examination to the United States Naval Academy at Annapolis, Maryland.

Between October and December 1928 a number of naval families, including Hubbard’s, traveled from Guam to China aboard the cargo ship USS Gold Star. The ship stopped at Manila in the Philippines before traveling on to Qingdao (Tsingtao) in China. Hubbard and his parents made a side trip to Beijing before sailing on to Shanghai and Hong Kong, from where they returned to Guam…

…Back on Guam, Hubbard spent much of his time writing dozens of short stories and essaysand failed the Naval Academy entrance examination. In September 1929 Hubbard was enrolled at the Swavely Preparatory School in Manassas, Virginia, to prepare him for a second attempt at the examination. However, he was ruled out of consideration due to his near-sightedness.He was instead sent to Woodward School for Boys in Washington, D.C. to qualify for admission to George Washington University. He successfully graduated from the school in June 1930 and entered the university the following September.

…The pulp magazine Thrilling Adventure became the first to publish one of his short stories, in February 1934

…Hubbard’s literary earnings helped him to support his new wife, Margaret “Polly” Grubb. She was already pregnant when they married on April 13, 1933, but had a miscarriage shortly afterwards; a few months later, she became pregnant again.
On May 7, 1934, she gave birth prematurely to a son who was named Lafayette Ronald Hubbard, Jr. and the nickname “His Nibs”, invariably shortened to “Nibs”.

According to The Los Angeles Times, Hubbard’s official Navy service records indicate that “his military performance was, at times, substandard” and he received only four campaign medals rather than twenty-one. He was never recorded as being injured or wounded in combat and so never received a Purple Heart. Most of his military service was spent ashore in the continental United States on administrative or training duties. He served for a short time in
Australia but was sent home after quarreling with his superiors. He briefly commanded two anti-submarine vessels, the USS YP-422 and USS PC-815, in coastal waters off Massachusetts, Oregon and California in 1942 and 1943 respectively…

…He wrote in January 1949 that he was working on a “book of psychology” about “the cause and cure of nervous tension”, which he was going to call The Dark Sword, Excalibur or Science of the Mind.In April 1949, Hubbard wrote to several professional organizations to offer his research.None were interested, so he turned to his editor John W. Campbell, who was more receptive due to a long-standing fascination with fringe psychologies and psychic powers (“psionics”) that “permeated both his fiction and non-fiction”.

Campbell invited Hubbard and Sara to move into a cottage at Bay Head, New Jersey, not far from his own home at Plainfield. In July 1949, Campbell recruited an acquaintance, Dr. Joseph Winter, to help develop Hubbard’s new therapy of “Dianetics”. Campbell told Winter:

With cooperation from some institutions, some psychiatrists, [Hubbard] has worked on all types of cases. Institutionalized schizophrenics, apathies, manics, depressives, perverts, stuttering, neuroses—in all, nearly 1000 cases. But just a brief sampling of each type; he doesn’t have proper statistics in the usual sense. But he has one statistic. He has cured every patient he worked with. He has cured ulcers, arthritis, asthma.

Hubbard collaborated with Campbell and Winter to refine his techniques, testing them on science fiction fans recruited by Campbell. The basic principle of Dianetics was that the brain recorded every experience and event in a person’s life, even when unconscious. Bad or painful experiences were stored as what he called “engrams” in a “reactive mind”. These could be triggered later in life, causing emotional and physical problems. By carrying out a process he called “auditing”, a person could be regressed through his engrams to re-experiencing past experiences. This enabled engrams to be “cleared”. The subject, who would now be in a state of “Clear”, would have a perfectly functioning mind with an improved IQ and photographic memory. The “Clear” would be cured of physical ailments ranging from poor eyesight to the common cold, which Hubbard asserted were purely psychosomatic.

Winter submitted a paper on Dianetics to the Journal of the American Medical Association and the American Journal of Psychiatry but both journals rejected it. Hubbard and his collaborators decided to announce Dianetics in Campbell’s Astounding Science Fiction instead.

In an editorial, Campbell said: “Its power is almost unbelievable; it proves the mind not only can but does rule the body completely; following the sharply defined basic laws set forth, physical ills such as ulcers, asthma and arthritis can be cured, as can all other
psychosomatic ills…

… Hubbard finally achieved victory over Don Purcell in 1954 when the latter, worn out by constant litigation, handed the copyrights of Dianetics back to Hubbard…

(Сonceiving of a child is as important as birth)

…Hubbard established an “Academy of Scientology” at this Northwest, Washington, D.C. building in 1955. It is now the L. Ron Hubbard House museum…

…He implemented a scheme under which he was paid a percentage of the Church of Scientology’s gross income and by 1957 he was being paid about $250,000 annually—equivalent to $1.9 million at 2010 prices…

…Scientology accounts do not mention Hubbard’s involvement in occultism. He is instead described as “continu[ing] to write to help support his research” during this period into “the development of a means to better the condition of man”. The Church of Scientology has nonetheless acknowledged Hubbard’s involvement with the OTO; a 1969 statement, written by Hubbard himself, said:

Hubbard broke up black magic in America … L. Ron Hubbard was still an officer of the U.S. Navy, because he was well known as a writer and a philosopher and had friends amongst the physicists, he was sent in to handle the situation. He went to live at the house and investigated the black magic rites and the general situation and found them very bad …

Hubbard’s mission was successful far beyond anyone’s expectations. The house was torn down.

Hubbard rescued a girl they were using. The black magic group was dispersed and destroyed and has never recovered…

…Along the way, Hubbard sought to establish a safe haven in “a friendly little country where Scientology would be allowed to prosper”, as Miller puts it. The fleet stayed at Corfu for several months in 1968–1969. Hubbard renamed the ships after Greek gods—the Royal

Scotman was rechristened Apollo—and he praised the recently established military dictatorship. The Sea Org was represented as “Professor Hubbard’s Philosophy School” in a telegram to the Greek government. In March 1969, however, Hubbard and his ships were ordered to leave…

Their presence was meant to be a closely guarded secret but was accidentally compromised the following month. Hubbard immediately left Dunedin and moved to Georgetown, Washington, D.C., accompanied by a handful of aides and messengers, but not his wife. Six months later, following another security alert in July 1976, Hubbard moved to another safe house in Culver City, California. He lived there for only about three months, relocating in October to the more private confines of the Olive Tree Ranch near La Quinta.

Hubbard used his time in hiding to write his first new works of science fiction for nearly thirty years—Battlefield Earth (1982) and Mission Earth, a ten-volume series published between 1985 and 1987. They received mixed responses; as writer Jeff Walker puts it, they were “treated derisively by most critics but greatly admired by followers”. Hubbard also wrote and composed music for three of his albums, which were produced by the Church of Scientology. The book soundtrack Space Jazz was released in 1982

…He was still closely involved in managing the Church of Scientology via secretly delivered orders and continued to receive large amounts of money, of which Forbes magazine estimated “at least $200 million [was] gathered in Hubbard’s name through 1982